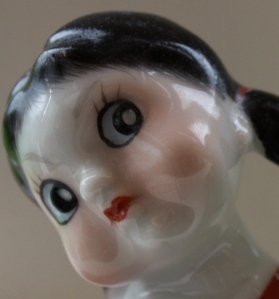 Hi Everybody, I am now completely well and can get a new post to you. Thanks for hanging in there for me.  I would still love to hear anybody’s response to a question in my last post: What do you think is the best way to learn to write; writing books, in a workshop, distance learning, mentoring or accredited course? It would be really interesting to to hear what you have to say about that or what you find has suited you best. And any comments on workshops you have attended would be welcome, too.

In the next post we have a guest post, an interview with a Flash Fiction writer, so look out for that. In the meantime, on with today’s post and problem.

Problem: ‘There is something fake about my characters. My invented characters never seem to turn into fully realized people. How do I make this happen?

Grow a character:
As writers we are not interested in creating real people, just constructs that appear real, that show only parts of themselves, that come out of truth without being actual truth and yet convince us they are as real as if they were physically present.

It is easier to create a character that is not wholly based on someone that you know because real people are more complex than characters need to be. However, you can borrow character traits from different real people and mix them together and exaggerate some traits and leave out others. Once you have added different names and clothes, they will have a new identity.

Try this TIP
Many people start writing their stories from an idea about a character but you don’t have to. There are other ways to lead you deeper into a character first. For example, I usually start a story with a need to explore a situation based around an emotion of some kind. Then I imagine what sort of person would feel that way, or do that sort of thing, or be in that kind of place and then I ‘get into their shoes’ and walk around in them for a bit and see things from their point of view. As their strengths and weaknesses begin to show in action, I can modify my (and later my readers’) impressions of them.
I think this is a useful exercise if you can get it to work for you, because it can lead you into how a character looks and speaks and behaves as well as what motivates them.

Example:
Lets say for example you have an idea for a story about a woman who can’t face that she is getting older. Then you ask what sort of woman would that be? What might have caused this? How would this feeling manifest itself in her? In jealousy? In fear? What sort of situation would bring this out in her? You can grow layers around a character in this way before you start.

Try this:
Take any everyday situation, charged with an emotion that you know something about, such as about someone who is unhappy about a relationship they are getting into and go from that emotion and what caused it, further into the character.

This approach helps with those character checklists, too, that some people like to fill in, (the ones that have lists of questions about your character like ‘What do they have in their pockets?’) For example it would be easy for you to choose a pair of earrings for your character because you like them, or a hairstyle because you noticed it recently, but you need to be thinking about whether these are what THIS particular person would choose. In a sense you are not filling out the checklist, they are.

Avoid Types:
Avoid stock characters, the stereotypes that you see in TV stories like the down and out detective, the bumbling old person, the vain model etc, because types lock into the extreme characteristics of groups of people. No individual is a type and your characters need to be individuals.

Slightly more rounded character = A waitress speaking to a customer, an elderly woman, about how long she has been growing her hair. On a later occasion she shows the customer a photo of her daughter, also with very long hair, and tells her that she doesn’t see her very often.

Round character:  Readers are told the story through the eyes of a waitress, who is a single mum  struggling to save enough money to be able to help her daughter and to overcome the obstacles that are preventing this.  The more readers learn about her inner life and actions during this time, the rounder and more interesting she becomes.

Use Markers:
Characters become ‘living’ people through the use of markers, signals that reveal their cultural and social background; the same ones that you use to judge people you meet: appearance (such as clothing) action (behaviour) speech (vocabulary and expressions) and thoughts/opinion (about what each other eats or owns) and so on.  To do this:

Pay attention to physical detail:
Appearance is barely touched upon these days but physical details can be telling e.g. stained fingers, or lack of eye contact. Clothing can say a lot and may be a source of conflict.

Give your character flaws, inconsistencies and unpleasant traits: Your reader will  respond to these emotionally. Unpleasant traits don’t have to be nasty. A character can be too kind, or too neat, or talk too much.

Put your characters into action:
Get your characters doing things. This often reveals more than surface detail. How your character behaves in certain circumstances will provide clues to beliefs, attitudes, habits, background and shortcomings, better than any words. How does he behave when finds out he terminally ill, when he meets someone he doesn’t like, when he discovers a wallet full of money, when he loses his job?

Get your characters to speak:
Let them speak to create a person and not just for plot or exposition. People reveal a lot about their values and attitudes  when they speak. Imagine your characters in conversation.

Allow them to think:
Readers want to know what characters think so they can try to understand them. However, it’s a good plan to steer away from long internal monologues. It’s hard to make them a success because they don’t allow interaction with others and therefore not much action or progress through the story and no dialogue.

Give them opinions:
When characters express an opinion about something, or analyse another character, this is will reveal not only something about the other character but also about themselves.

Don’t forget that you are not planning to TELL the reader about your character; your going to be SHOWING  them: If you need a bit of practice with this in a way that will help you strengthen an underdeveloped  character in one of your stories, try the following:

This is an exercise from page 49 of the book ‘What If’ by Anne Bernays and Pamela Painter and is entitled ‘Oh!… That Sort Of Person’. The objective is to “learn to select revealing concrete details… that may tell us more than the character would want us to know.” Start by putting your character’s name at the top of a blank page and then complete this sentence several times.
“He (or she) is the sort of person who……”.

Example:
So, instead of telling the reader he was a compulsive eater you could show him in action:

He was the sort of person who would dip into his basket as he wandered around the supermarket and eat from a bag of crisps, take a chunk out of his bread, smear his finger with cream cheese and take a swig of orange juice. He would let the cashier ring up a pile of banana skins.

We can now see what his eating habits are like for ourselves and it gives us a deeper insight into how he is around food.

Next Post:  Interview with Nik Perring, a writer of Flash Fiction.

2 thoughts on “Bring a Character Alive”